T Shrichandrakala of Std.IX C took part in Vashista Open Championship series conducted by AITA – All India Tennis Association held on March 12th 2018, in Hyderabad. She was the Winner in under 18 doubles and Runner-up in under 16 singles. 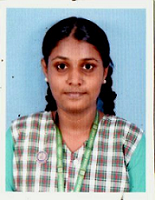 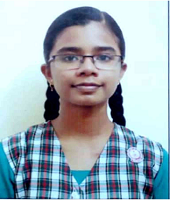 On the spot painting competition was conducted by the Government Museum Chennai on 14th Nov,2017. 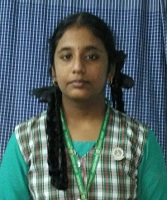 The Camlin Organisation conducted an Art Competition to encourage creativity in young minds on the topic ‘Fish and Butterfly’ . It was conducted on 6th Nov’17 and our school student Flavin Esther Raj of Senior Nursery-C won the SECOND PRIZE under GROUP-A category . 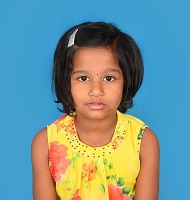 I have been writing poems since I was seven years old and I used to scribble on whatever piece of paper I lay my hands on. My parents then presented me with a diary to jot down my thoughts and from then on I started writing my poems in a proper manner in it. When the collection of poems and a few short stories swelled, I wanted to bring it out in the form of a book –thus came about my first book, “Cascade of My Thoughts” - and I am very proud and honoured that it was launched by our School Principal Sr.Prabha on April 26th , 2017 at the Russian Cultural Centre, which was well attended by my family, friends and well wishers. I thank God Almighty for providing me this opportunity. 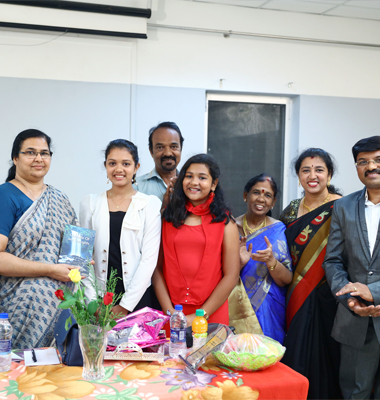 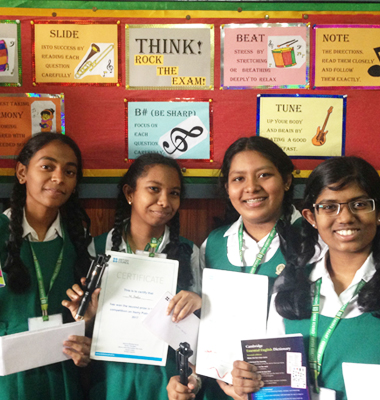 To commemorate that special, flaming moment that changed the course of history, The British Council, Chennai, hosted a series of events and competitions for Potterheads from around the city on the 26th of June, 2017- anniversary of the release of the Philosopher's Stone. Among the events, was a mind-boggling quiz-bested only by the best.

Sneha M. and Sriha M. of X B, proved to be true Potterheads by standing II in the quiz.

Akshaya S. and Shubangi G. of X C were placed 4th in the same event, with participants ranging from 12 to 35 years of age.

Never more could the wizarding world of J.K.Rowling's be as thoroughly explored!

A.Siromita from Std.IX A won the I place in all the below events

Weapons
Shivani Sriram from Std.VIII A won the III place in Individual Kata. 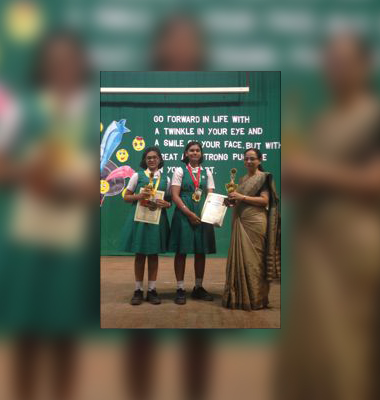 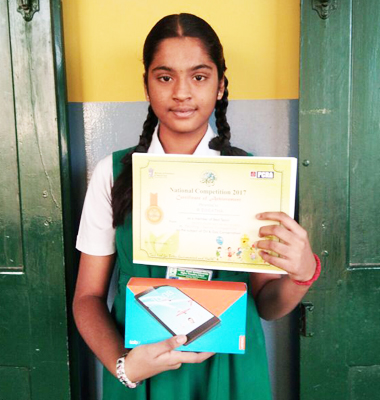 Sanjana has participated in Individual Kata/Female black belt (12 to 16 years) category and has won the third place in the 35th BUDOKUM Karate – Do India National Karate Championship – 2017, held from 24th November 2017 to 26th November 2017 at Karamangale Indoor Stadium, Bengaluru, Karnataka. She is awarded a merit certificate and a bronze medal for her achievement.

KATHIYAYINI AT THE HARVARD MUN

Model UN is a diplomatic platform for students where UN committees are simulated and world issues are debated. Kathiyayini Sivakumar has been an active member of the Chennai circuit, having participated as delegate, chairperson and organizing member in over 15 conferences so far.

HMUN China : She has been selected to be the Assistant Director for World Trade Organisation at Harvard Model United Nations China, to be held from March 16-19 this year.

YMUN Korea : She has once again been chosen to be a Vice -Chair for the UN Women Committee at Yale Model UN Korea to be held from May 19-21, this year.

She was chosen after several rounds of applications and interviews over the past one month. She is the only student from South India to be selected for both the international conferences. 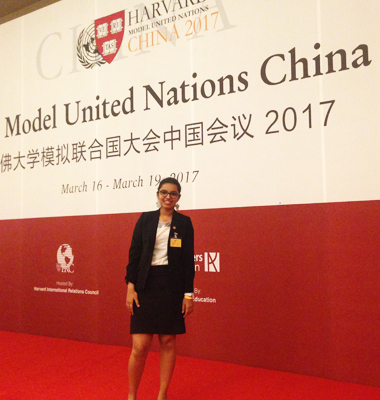 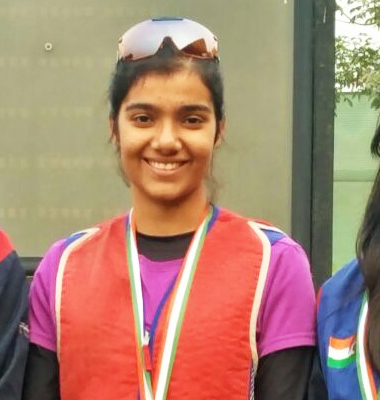 Asila Khilji F. of std. XII A2 is a National level Trap Shooter and also an aspirant for the Indian Junior Trap Team 2018.

Asila is qualified for the Junior Women Finals in the Trap Event and finished off at the 6th place qualifying for the Indian Junior Team Trials at Delhi, January 2018.

Youth Parliament was held in Madras Christian College School, Harrington Road on October 20th and 21st after meticulous training period of 4 months. Iniya M.R. of Std XI C1, Anahita Paul of XII C1, Purva Soni of XI B, Lasya Adiraj of XI A1 participated and represented Sacred Heart in this prestigious conference. The Participants had the great opportunity of interacting with former Union Minister for Finance Mr. P. Chidambaram, who happened to be the Chief Guest for the inaugural ceremony. Anahita Paul took up the post of Environment Minister and succesfully passed "The Forest Conservation Bill". Lasya and Purva served as the opposition party members and raised lot of questions during the session. Iniya Ramesh successfully passed the Amendment in "Article 35 A” of the Indian Constitution as the Home Minister. She was the prime debator in the Parliamentary debate session. At the end of the two day conference, prizes were given away on the basis of votes and Iniya Ramesh was awarded the Best Parliamentarian by the Chief Guest of the Valedictory Ceremony Rev. Fr. Jegath Gasper Raj. On the whole it was a great learning experience and it was indeed a pleasure to be mentored by Miss. Malathy. We thank the debate club and the Management for giving us this opportunity. 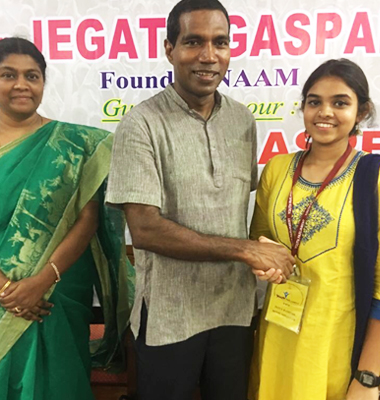 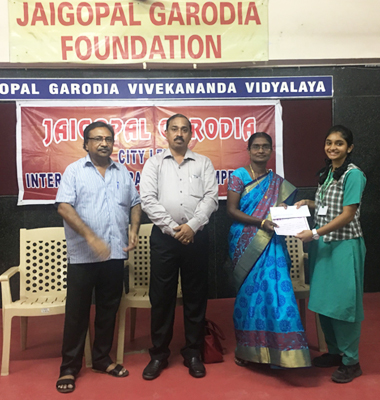 Jaigopal Garodia Vivekananda Vidyalaya School conducted a District Level English oratorical competition on, ‘Life as a Leader'. Hundred and ten participants from 78 schools took part in this event. T.S.Vyshnavi of std. XI-B secured the first place and won a cash award of Rs.2000. 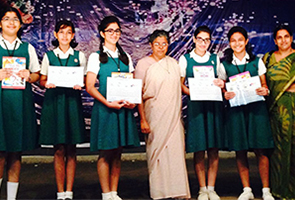 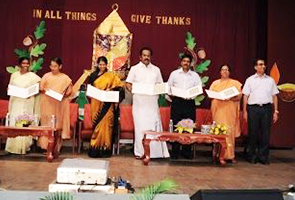 From the first batch of students who wrote their Matriculation Examination in 1954, the school has produced bright and promising students, who have contributed greatly to society. 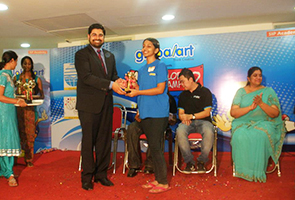 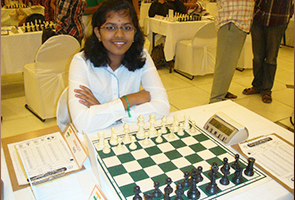 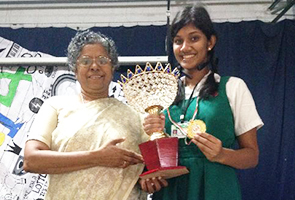 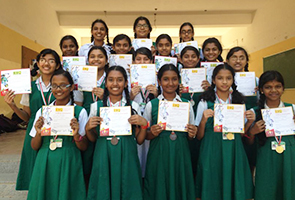 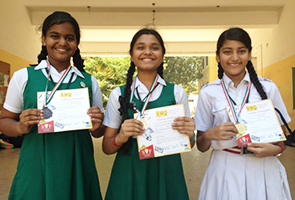 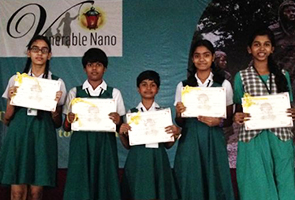 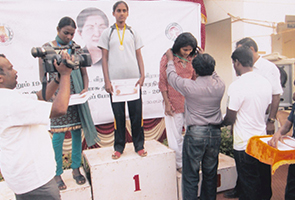 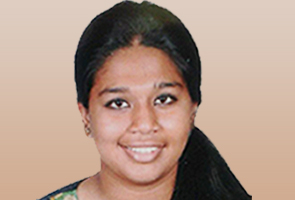 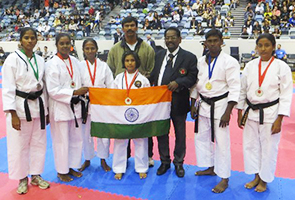